When I was three years old, I found a red pan in my preschool classroom. I used to walk around with this red pan and pretend to play guitar on it. There is a photo of me that my parents still hang onto. I have big, fat cheeks, and goofy, green overalls, and I’m soloing away at a red, plastic pan.

As I got older, I got rid of the pan, but the air guitaring remained. When I was a kid, I was always pretending to play guitar.

But weirdly, I never actually learned to play. I tried the recorder in third grade. Mom offered to let me play clarinet in fourth grade, but I didn’t even consider that an instrument.

And then I got to college. Freshman year, there was a kid down the hall named Nate. Nate played guitar. He played in bands. He asked me if I wanted to live in his off-campus house sophomore year.

I agreed on one condition: He had to teach me how to play guitar.

So I bought a Martin guitar that year — dark mahogany, a deep sound. I spent the first three months playing three chords, over and over: C, E minor and D minor. In that order. Over and over. 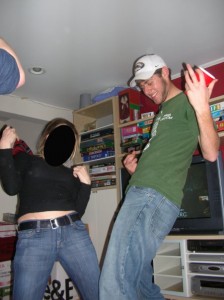 But I kept playing.[1. I kept up my air guitar skills, too, for what it’s worth.] By the end of the year, I had a few songs under my belt. I couldn’t play with rhythm. I messed up often.

But I could finally say I could play guitar.

I kept going. Junior year, I started to gain rhythm. Senior year, I actually figured out how to use a capo and play different sounds.[2. Some of my friends didn’t realize I had learned guitar until much later. One friend saw a guitar case at my apartment and asked if I had, as a joke, purchased a case for my air guitar.]

My first year out of college, I accidentally discovered how to correctly play bar chords. That took me a year or so to master.

By the time this year came around, I wasn’t all that bad. I could play harmonics. I could play semi-complex rhythms. You could yell the words “Free Bird” at me and I could sing the guitar solo while simultaneously playing the rhythm.

But as far as my live guitar playing experiences were concerned, it was still pretty much limited to a lot of me, in front of the bathroom mirror, belting out Springsteen[3. The acoustics are always excellent in bathrooms.], and occasional fireside guitar sessions at the beach.

Which is why I decided to give a TED talk this year in which I would play guitar while simultaneously leading a group sing-along.

Here’s the thing: I love TED talks. They’re inspiring, and they’re right on that line between entertaining and informative. That’s the line I’m always trying to toe.

And I’ve always wanted to play guitar in front of a large group of people. I’m not a musician. I don’t play in a band. I don’t get a lot of moments to feel like a rockstar.

So a TED talk about U2 in which I play guitar and lead a sing-along? Hell yeah! Let’s do this thing! No sense in getting in the ring if you’re not going to throw your weight around, right?

I mean, I asked myself: Did I care enough to put myself behind something I’m really passionate about?

I love playing guitar. I’ve always loved it. I was obsessed with it long before I actually started playing.

And here came a crazy opportunity.

I was worried about everything that could go wrong. So was the TEDx team.

But I started thinking about what’s come before. Life’s always been a series of escapes for me, one larger than the last. Every few months, I do something stupid, get myself into trouble, and then figure out how to get out of it.

And slowly, I started to learn that I was just dumb enough to consistently put myself into strange situations, but I was also just smart enough to come out of them okay. That time my sister and I walked across the Moroccan border? We ended up having an amazing trip. That time I went to China with the wrong visa? I fixed it and got to experience the Olympics.

That time I my Ford Explorer nearly caught fire on I-70? I still made it to the game.

I’ve been in enough trouble that I started a series on this blog titled “Things That Comfort Me When Every Fucking Thing Goes Wrong.”

So I know: Whatever I get myself into, I can get myself out of. I try to stay in over my head at all times, but I always go into it knowing that I have a history of surviving whatever goes wrong.

Then TEDxMU came around. I had the guitar tuned. I had the thing mic-ed. I was ready for disaster.

The talk ended, and I saw this:

I don’t know how I pulled it off. But I knew going in that I would. I believed fully that somehow, on stage, I would do what I had to do to survive the talk.

That was all I really needed to get up there and give a crazy thing a try.