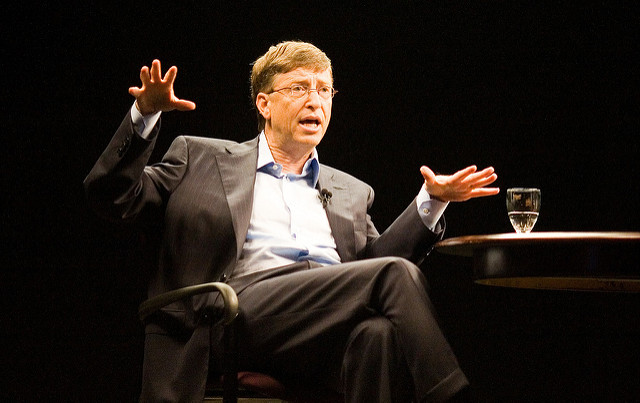 There’s a famous “Today” show clip, from 1994, about e-mail. You’ve probably seen it. Bryant Gumbel and Katie Couric are sitting on a couch, trying to figure out how to correctly read an email address, but get tripped up by the @ sign. (“That little mark with the ‘a’ and the ring around it” is how Gumbel describes it.) And then Gumbel adds the kicker: “What is Internet, anyway?”

That clip turns 25 this year. So does this New Yorker story — one that paints an equally fascinating picture of the internet in 1994, but from a very different perspective. The story is “E-Mail from Bill” — Bill, as in Gates — and it’s a profile of the Microsoft founder. Some of the passages in the piece are eerily prescient. For instance:

But all Gates’ influence and success are small potatoes compared with the influence he could have and with the opportunity that now lies before him. The computer, which in twenty-five years has evolved from a room-size mainframe into a laptop device, appears to be turning into a new kind of machine. The new machine will be a communications device that connects people to the information highway. It will penetrate far beyond the fifteen per cent of American households that now own a computer, and it will control, or absorb, other communications machines now in people’s homes: the phone, the fax, the television. It will sit in the living room, not in the study. The problem of getting people to feel comfortable with such a powerful machine will be partly solved by putting it inside one of the most unobtrusive objects in the house: the set-top converter, which is the featureless black box on top of a cableconnected TV set (the one the cat likes to sit on if the VCR is occupied).

Think about that: Computers did eventually come to most American homes. The computer did eventually absorb the phone, fax (!), and TV — and then kept going.  Today, even refrigerators and cars can be connected devices. In 1994, this prediction was spot on: The big opportunity ahead was figuring out how to power all of our devices.

At Microsoft’s main office, in Redmond, a suburb of Seattle, I saw a demo of an early version of the company’s operating software for the information-highway machine, in which the user points at the TV screen with a remote control, clicks onto icons, and selects from menus. I heard a lot about “intelligent agents,” which will at first be animated characters that occasionally appear in the corner of your TV screen and inform you, for example, that President Aristide is on “Meet the Press,” because they know you’re interested in Haitian politics, but will eventually be out there on the information highway, filtering the torrent of information roaring along it, picking out books or articles or movies for you, or receiving messages from individuals. As the agents become steadily more intelligent, they will begin to replace more and more of the functions of human intelligent agents: stockbrokers, postal workers, travel agents, librarians, editors, reporters.

OK, here’s another, from John Seabrook, who wrote the piece:

When I was ten, I would sit around with my friends watching it snow, and someone would say, “I wonder what the deepest snowfall ever was,” or something like that, and someone else would say, “Yeah, it would be cool to know that.” It seemed that there should be this giant, all-knowing brain, which could answer that kind of question.

We were just a few years away from putting a name to that all-knowing brain: Google.

In twenty years what now takes a year of computing will take fifteen minutes. We have no idea what we are going to do with this power, but it will exist whether we want it to or not.

You could lift that sentence, exactly as written, and place it in a 2019 story about Elon Musk or quantum computing, and it would be just as true as it was 25 years ago.

You should read the whole piece. There are so many unusual moments that only make sense now that we know what happened next. It refers to AOL as “an information service.” It discusses an anti-trust suit that helped give Google a chance to grow — even though the web browser at the heart of the eventual decision (Internet Explorer) did not exist in 1994. It quotes a leader in the tech industry who says that an introvert like Gates “is not the kind of person you want building the social network of the future.” Even Gates himself, when asked about the legacy of leaders such as Steve Jobs, says, “I don’t think any of us will merit an entry in a history book.”

But what I find most incredible is this: it’s a 12,000-word story that does not use the word “internet” once. (The word that Gates and others use, repeatedly, is “information highway.”) It helps to be able to see around corners, to know what’s coming up ahead — Gates clearly could. But no one knew exactly what would happen next, or even what they’d call it when whatever’s next arrived. In 1994, AOL was an experiment, Google was a dream, the hosts of one of America’s most-watched TV shows had no idea what email was, and Bill Gates wasn’t calling the internet “the internet” yet. Remember that. There are times when you’ll feel like you have no idea what’s happening, or what you’re supposed to do next, but you’re not alone. No one knows — we are all just figuring this out as we go along.

That photo of Bill Gates is by Thomas Hawk and is used here thanks to a Creative Commons license.